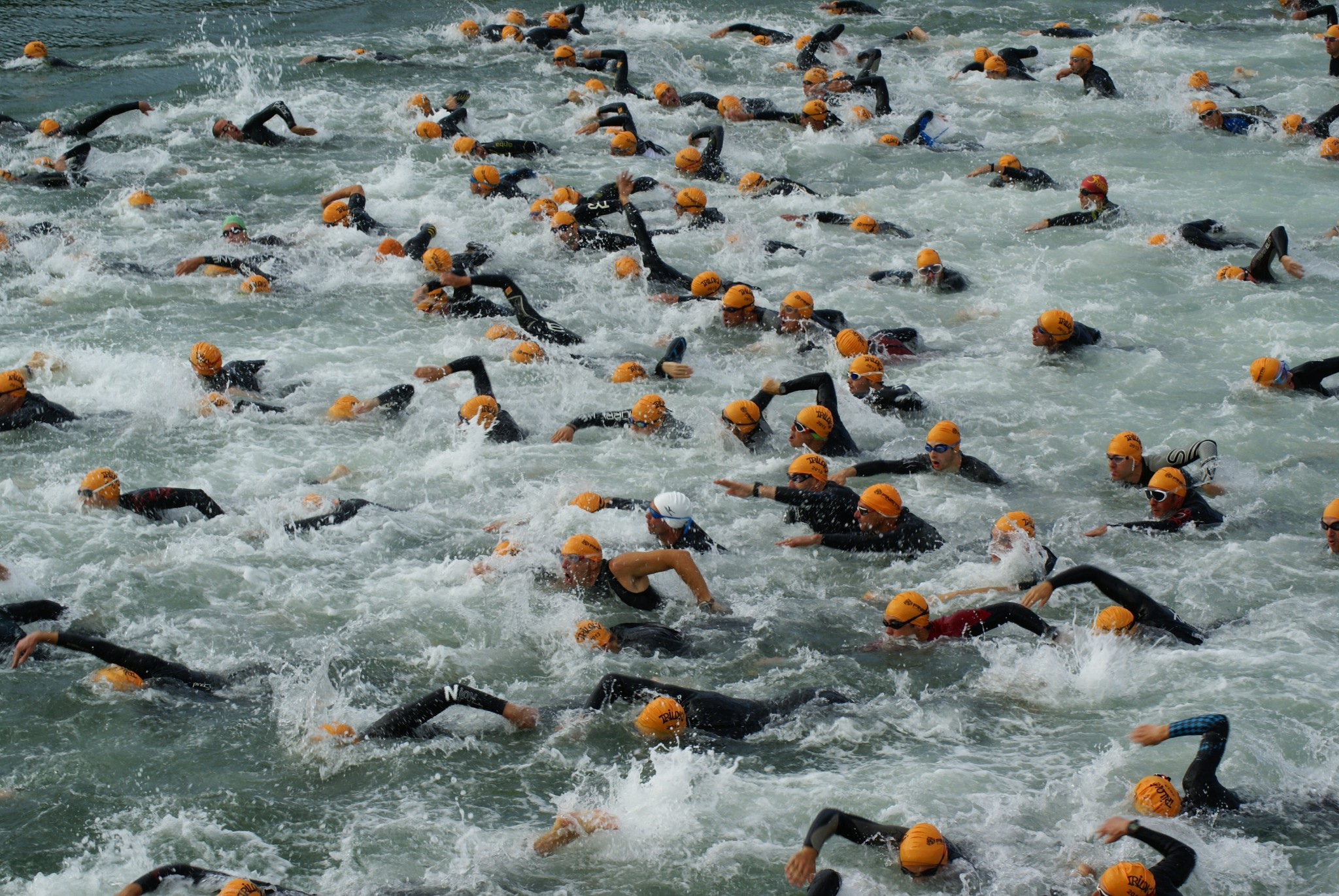 Early in the year, when I decided to sign up for my first triathlon, I remember thinking that I would do a Sprint and Olympic distance and that’d be it - mission accomplished. That was before I was addicted - a week after that first race, I went looking for more triathlons to sign up for and found Jack’s Generic Triathlon. Jack’s celebrated it’s 14th anniversary this year, so it’s been a staple in the Austin triathlon scene for a long time. The name comes from the race’s emphasis on athletes and the race itself rather than sponsors, big name participants, etc.

JGT is held at Lake Pflugerville, a venue I’m pretty familiar with having raced in the Lake Pflugerville Sprint Distance Triathlon in June. It’s also become a favorite spot of mine for swim / bike / run workouts. Lake Pflugerville is well suited as a venue for multi-sport races. The beach has a good swimming area, most of the roads in the area are low traffic and the lake has a trail that goes around it for about 3 miles. The only difficulty is that the lake is plagued by fast growing hydrilla that can make swimming… interesting.

I arrived at Lake Pflugerville at 6:20am and was directed into the parking area (basically the grass beside the parking lot). I got my bike and my bag and headed towards the transition area where volunteers were ready with markers to do body marking. I got my number and headed into transition - volunteers were checking wrist bands to make sure that only athletes were entering the transition area. 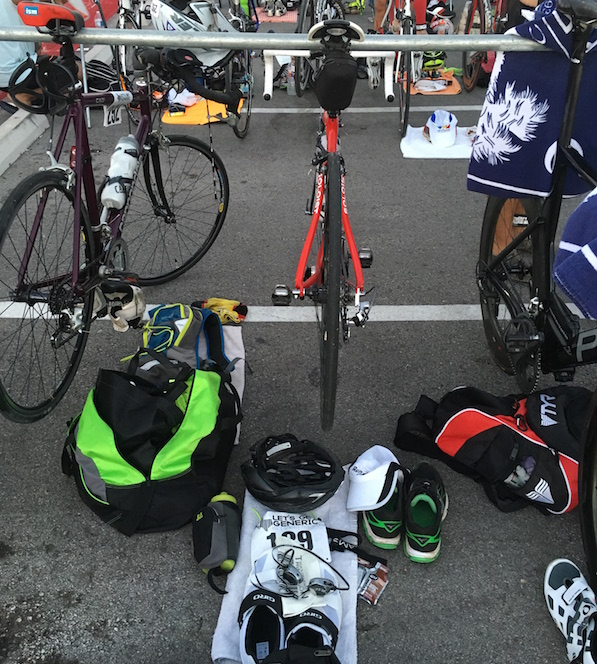 Transition closed at 7:00am and athletes started congregating on the beach. After some brief stretching we were able to go for a very quick warmup swim. High Five Events had been at the venue in the days before clearing out the hydrilla and they managed to clear out a nice out and back course. Thank god because that stuff was annoying during practice swims in the lake.

The warmup was a bit hilarious. I swam out to the first buoy, then turned around and saw the horde coming right at me — uh oh, I didn’t think this through! Luckily I managed to get to shore without getting hit in the face by an oncoming swimmer.

The race started promptly at 7:30am with the open wave, followed by all intermediate women, followed by intermediate men 39 and under, which is my swim start group. Swimmers started one at a time, so once again I avoided the dreaded mass start. The swim course involved two 500m loops with a short (and I mean like 10 feet short) run on the beach between the first and second lap. I managed to stay on course for the most part (only swimming an additional 80 meters according to my Suunto watch) and only got punched in the head a few times. I even managed to pass a few people without incident. I wanted to finish the swim in 20 minutes — I based this on what it would take to make a top 10 finish in my AG last year. I ended up doing it in 21:16, which was 10th amongst M 35-39. So far, so good.

My T1 got off to a rough start - I remembered a specific curb that my bike was close to, unaware that it was just like another curb nearby, so I ran right past my bike and got a little lost - probably wasted about 30 seconds or so. Once I got to my transition area things went smoothly. This was my first race going sockless in my new Giro Inciter tri shoes, which saved me some time. Anyway, off I went on the bike. 2:40, also 9th in my age group. 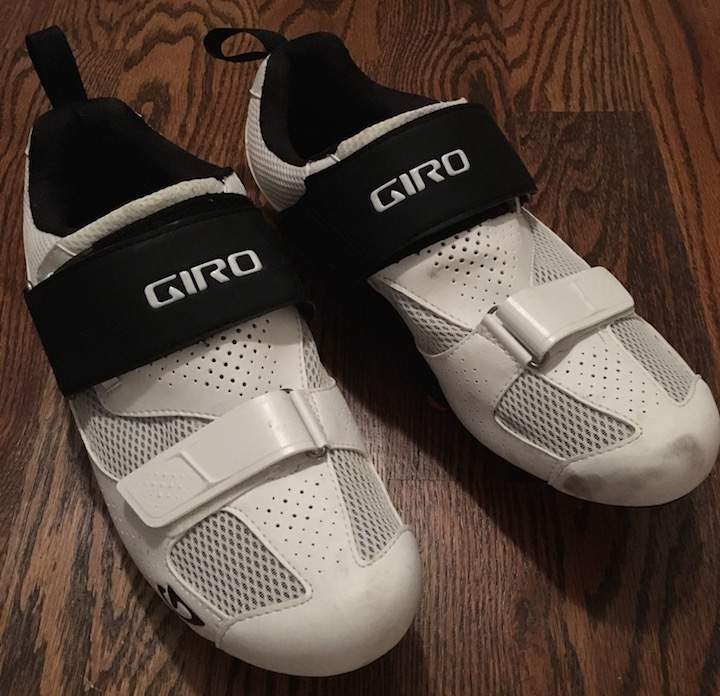 The bike portion went alright. The course is really great. There are some really nice curving turns on Jesse Bohls Rd and Engelmann Ln that almost feel banked so you can pick up speed as you lean into them. I managed to pass quite a few people on those turns. Overall I only got passed by a few people on expensive tri bikes and huge calf muscles, so I feel like I did alright. My average speed was 19mph, with a time of 1:22:11, 12th in my age group. I’ve got a bit of work to do on the bike, so I’m going to do more interval workouts to try and bring my speed up. Also, the new shoes have one small annoyance - the velcro strap on my left shoe kept rubbing against my bikes crank. Not a huge deal, but I had to reach down and fix it a few times, which probably took a few seconds off.

My T2 went better than the T1. 1:25, 6th in my age group. Going sockless and having elastic laces really helped here - all I had to do was pull off my Giros and snap on my Mizunos and I was off.

I started the run course with a quick stop at the aid station to down some water and gatorade and then I took off, trying to set a sustainable pace. I’ve run this course a bunch of times before and while it’s a great trail around the lake, it’s mentally challenging. There are parts of the course that weave away from the lake and make it seem longer than you might otherwise expect and there’s almost no shade. My plan was to try and ignore how far I had to go and just look down and straight ahead. My brain worked against me a few times here and I ended up thinking a bit too much about the distance and heat. According to the chip time, I finished the run in 53:04 or 8:51/mile. Again, 9th in my age group, but still much slower than I’d like. I feel like I should be able to manage something closer to 8:00/mile based on my training paces. Something to strive for next year. Going sockless in my Mizunos took a toll - in the second lap I felt my feet a lot and started noticing friction burns and blisters. I didn’t let it slow me down but I’m now sold on tri-specific run shoes and will probably shop for some before my next race. I walked a few times during the run, but tried to keep it to aid stations and ran solidly for the last mile. I started to feel nauseous a few times which might have meant I wasn’t hydrating properly. The laps are a little less than the advertised 3 miles - my watch clocked them in at 2.8 or so, so this was actually something like a 5.7 mile run, not a 6 mile run.

Crossing the finish line felt great - I find courses with laps mentally challenging but there’s something great about that final lap when you get to run towards the “Finish” sign instead of the “2nd lap” sign. I crossed the finish line and was handed my finishers medal and water bottle. I saw some familiar faces at the finish line - my training buddy Holland had finished a minute ahead of me and I ran into Shane from RunLab who’s helped me overcome nagging shin splints this season. If you’re in Austin and have any running related injury or performance concerns, check out RunLab, they’re awesome folks. After collecting myself, I headed to the beer tent for the best tasting Fat Tire I’ve ever had.

My total finishing time was 2:40:38, which placed me 10th in my age group - I’m really happy with a top 10 finish and while I’ve got areas that I really want to improve on next year, I’m proud of this time especially for my first year doing tris.

Overall, had a blast and highly recommend this race. It’s really well organized - kudos to the good people at High Five Events, all the other participants in the race and especially to all the volunteers who must’ve woken up at an ungodly hour to help make it all happen. I’ll be back next year looking to nudge closer to the podium. 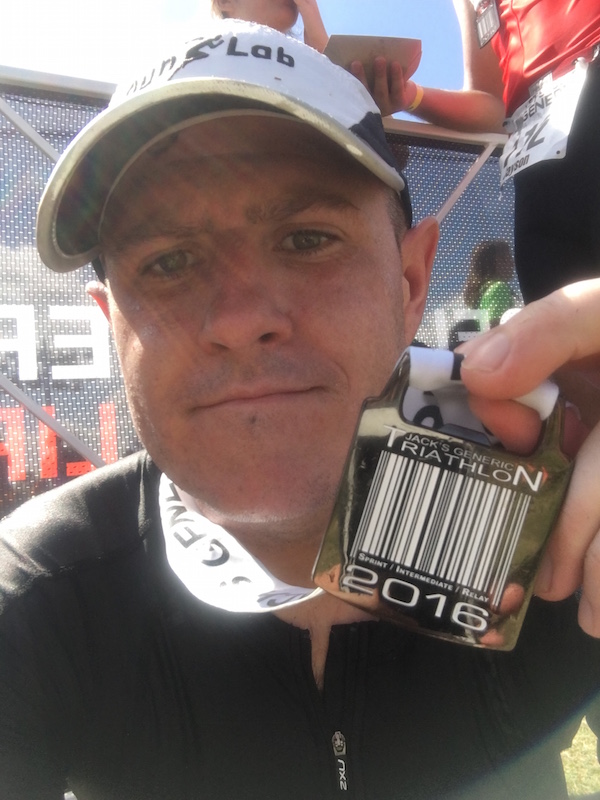